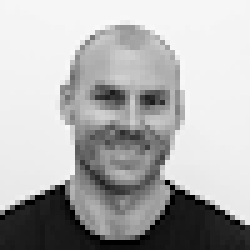 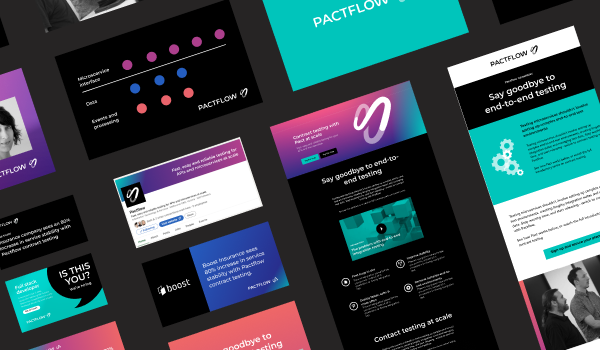 Starting out lean
Like most startups, Pactflow embraced lean methodologies to get their product off the ground in its early stages. Keeping things lean was critical across all aspects of the business, including the brand. A look back at some other well-known startups (Airbnb, Uber, twitter), shows it's not an uncommon story. As important as a strong brand is, it's sensible to invest in product features over slick graphics.

Read on to learn about the journey of the refresh and meet our new mascot - Paxton the Pactflow platypus!

Back in 2017, the Pactflow team enlisted me to develop a simple style guide of colours, fonts and a logo you will probably be familiar with.

Since then, Pactflow has become the global leader for teams to orchestrate contract testing with Pact. Thousands of developers around the world, working at startups, Fortune 500 companies, and everything in between, agree that Pactflow is the best way to deploy with confidence and speed.

Now, as Pactflow has matured, there was an obvious need for the brand to evolve too.
As a designer, I was itching to revisit some aspects of the brand that weren't hitting the mark and excited to bring some new thinking to areas of the brand that could better represent what Pactflow is today - beyond just a look and feel.

The goal was to build on the brand's established foundations. Recognition and recall are valuable assets for any business, and we did not want to jeopardise that with a complete identity change.

In that sense, colour was key. Pactflow features a distinctive mesh gradient of pinks, purples and teal on its homepage. It's a beautiful thing but also proved to be a real challenge to use across our marketing collateral. If used in its entirety, the graphic device becomes repetitive, and when cropped, the in-between gradient tones are dull and muddy.

By developing a system of complementary linear gradients, we have been able to retain the essence of the original mesh and provide additional opportunities for variability. The colours are vibrant and bold, designed for key moments of communication, such as hero banners and impactful slides. To balance this, the majority of the Pactflow content is presented in high contrast black and white, ensuring impact moments that utilise colour carry the maximum effect in a distinctive Pactflow style.

The second aspect of the brand that needed to be addressed was the Pactflow logotype and icon. The original logotype featured a thin san-serif with an extended W. The W was designed as a visual metaphor for 'flow', a graphic device also adopted as the Pactflow icon. In hindsight, it was an unusual choice to use the last letter of the brand for its icon - Understandably, it left many people questioning 'why W and not P?'

Our new icon revisits the same flow concept with a more abstracted fluid form of an infinity loop. In addition to the icon, the typeface weight has been increased to improve legibility at smaller scales. It also helps our mark to hold its own when positioned alongside our partners.

A reflection of people and culture (and a new team member!)

This third aspect of the brand might, on the surface, seem a little silly. I'll admit, when the idea of creating a mascot for Pactflow was first floated, I was a little sceptical of what value it could add. Sure, it might help the brand be more memorable, but do we really need to hop on the mascot bandwagon.

It's not uncommon for companies to use animals to connect with customers. Developer tools, in particular, have a long history of assigning playful characters to their products. GitHub, Reddit and Android are just a few most would be familiar with, there are many more too.

In researching and trying to understand the phenomenon, I discovered a more profound value for having a mascot than I had initially considered.

It is deeper than look and feel aesthetics and is emblematic of the people and culture behind the brand. I've seen the team at Pactflow grow from the core founding members (all developers themselves) to become the thriving startup it is today. From the outset, the team have nurtured a positive culture and spirit centred around their vision to ‘create a world that doesn’t worry about deployments’. This squishy, bubbly platypus is a reflection of all of those good things wrapped up. Just as it is a positive symbol for customers to identify with, it's a symbol for the Pactflow community to embrace and feel good about.

Pactflow’s customer base spans the globe, with many based in the UK, Europe and North America - the team loved the idea of having a unique Australian animal as their mascot.

A platypus is a land and water mammal, found only in the wild on the east coast of Australia, so keeping with the theme of flow - if you ever get to see a platypus move through water, you’ll see how it goes with the flow.

And there is so much more to come

Enhancing the developer experience is core to what Pactflow is as a product. Our new team member, Shuying, is taking the charge to level up our UI and in-app features to make it simpler to navigate, bring faster feedback, and gain insight into the process.
It will become even easier to debug test failures, understand what's safe to release and visibility into the system.

From lean-startup to maturing product, it's been exciting to be part of the Pactflow journey and now finally to see the brand evolve to reflect who they are today. Flexible colour palettes, improved typography and icon, and now an adorable mascot is just the start.

Got some feedback about the new look & feel? We’d love to hear from you.

This guest blog post was authored by Carl Thompson, Product Designer at DiUS (Pactflow's founding parent company). At DiUS, Carl works across a diverse range of clients from enterprise to start-ups just like Pactflow. His background is visual design, product strategy and user experience. Carl is passionate about harnessing emerging technologies and design to problem solve and create meaningful product experiences.